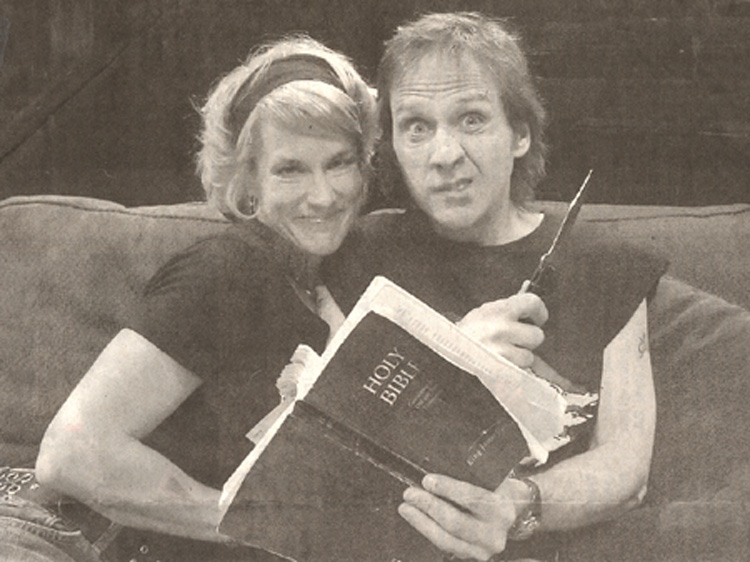 You don't have to believe in reincarnation to enjoy Medicine, Man.  But you might not
make much of its pretensions to spiritual insight otherwise.

Theatre Three opened the area premiere of Jeffrey Stanley's 2003 comedy on
Monday. It offers lots of laughs and some astute observations on class and regional
differences in the United States. The story, though, relies on a back plot a century
old -- all the characters were connected in their previous lives. Whatever your
metaphysical beliefs, you might prefer the playwright to solve his plot on its own
terms -- or perhaps to hear more about all those folks in the background story.

At the play's start, Calvin Barker, a Virginia NASCAR fan (played by Scott Latham), has
had to cancel his plans to watch a race with his buddies; he found his mother
unconscious when he went to her house to do some chores. In the absence of her
regular physician, she's under the care of the ambitious Dr. Sue Morrison (Kerry Cole).
The doctor assumes that Calvin must be drunk when he reports having seen a
mysterious Indian man, who was standing by his mother's body, walk through a solid
door. Soon, however, the Indian (R Bruce Elliott) begins talking to her, too.

For the ICU waiting room, Calvin calls his more sophisticated twin sister (Diane
Worman), his none-too-attentive girlfriend (Leslie Patrick) and his mother's pastor
(Dan Nolen, Jr.). Eventually, all of them end up at the hospital. But none of them gives
Calvin the help he was looking for -- until that mysterious medicine man has a
conversation with each in turn.

Director Terry Dobson's production goes several different ways at once -- but then
so does the script. Each actor gives an incisive performance, but not all in the same
style. The accomplished Mr. Latham gives us an appropriately charismatic blue-collar
ne'er-do-well, but he tends to punch out his jokes and mug broadly. Mr. Elliott manages
the shifts back and forth from almost religious solemnity to inspired silliness with
rather more aplomb.

A deliberately improbable romantic tension arises between Calvin and the doctor, but
Mr. Latham and Ms. Cole never quite convince us that there's a chemistry between
them. Ms. Patrick and Ms. Worman are vivid in a good way, but Mr. Nolen goes way over
the top in his first scene -- why does the role of a clergyman seem to give actors a
license to overact? Thereafter, though, he's more credible.

For all one's misgivings about script and production, Medicine, Man has a lot of charm.
Mr. Stanley has both a good eye for what's going on in American life and a good ear for
the way people talk. It's worth a look.