Dispatches
Notes from all over 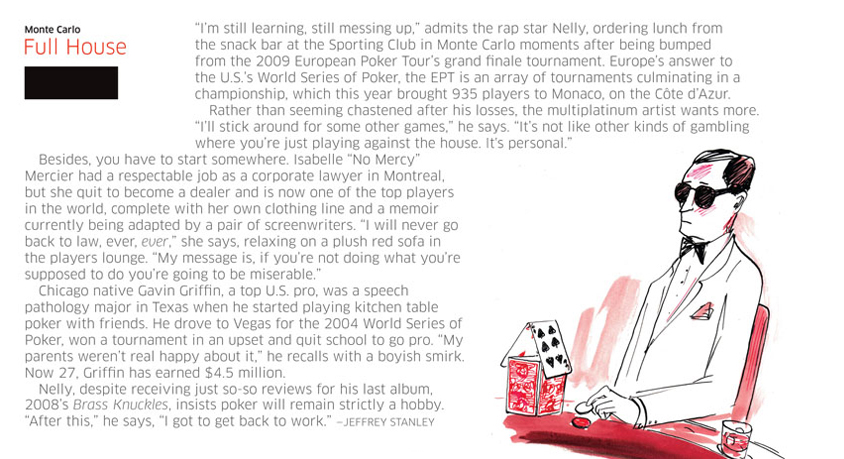 “I’m still learning, still messing up,” admits the rap star Nelly, ordering lunch from the snack bar at the Sporting Club in Monte Carlo moments after being bumped from the 2009 European Poker Tour’s grand finale tournament. Europe’s answer to the U.S.’s World Series of Poker, the EPT is an array of tournaments culminating in a championship, which this year brought 935 players to Monaco, on the Côte d’Azur.

Rather than seeming chastened after his losses, the multiplatinum artist wants more. “I’ll stick around for some other games,” he says. “It’s not like other kinds of gambling where you’re just playing against the house. It’s personal.”

Besides, you have to start somewhere. Isabelle “No Mercy” Mercier had a respectable job as a corporate lawyer in Montreal, but she quit to become a dealer and is now one of the top players in the world, complete with her own clothing line and a memoir currently being adapted by a pair of screenwriters. “I will never go back to law, ever, ever,” she says, relaxing on a plush red sofa in the players lounge. “My message is, if you’re not doing what you’re supposed to do you’re going to be miserable.”

Chicago native Gavin Griffin, a top U.S. pro, was a speech pathology major in Texas when he started playing kitchen table poker with friends. He drove to Vegas for the 2004 World Series of Poker, won a tournament in an upset and quit school to go pro. “My parents weren’t real happy about it,” he recalls with a boyish smirk. Now 27, Griffin has earned $4.5 million.

Nelly, despite receiving just so-so reviews for his last album, 2008’s Brass Knuckles, insists poker will remain strictly a hobby. “After this,” he says, “I got to get back to work.” —JEFFREY STANLEY